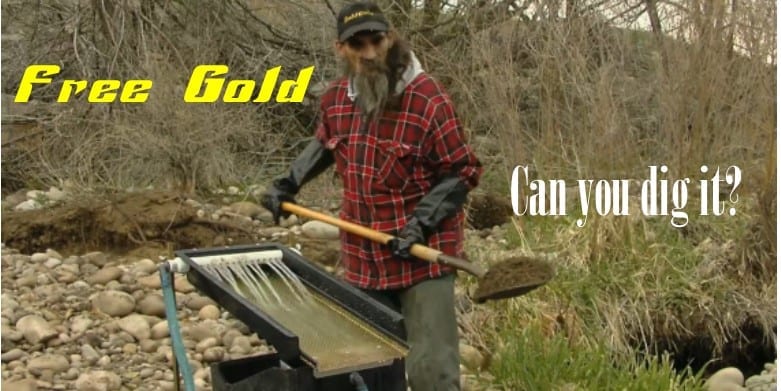 Gold Prospecting As a Prepper Skill

In a recent Craiglist ad I asked the simple question, “Would you trade for gold?” within minutes emails were pouring in; people from all over the area were willing to trade meat, vegetables, honey, car parts, bread, bullets, chickens, and eggs! After some follow-up with a few of them, I realized they  were hunters, ranchers, farmers, scavengers, and preppers. Some have already developed a network of bartering for goods, yet most of them were surprised to hear that my gold, was obtained from a local creek! Not a new concept since the West was founded on the same idea (think 49ers) and the peak of the gold rush most people traded their goods for gold and silver. What a comfort for me to know; elbow grease + shovel = asset.

But didn’t the old timers get all the gold? Hardly, in fact, gold replenishes itself in our creeks and streams after spring runoffs and floods practically every year and with recent droughts, prospectors are more successful than ever before. Modern prospectors have another advantage over the old timers, technology. Companies like Gold-N-Sand and Gold Cube are producing small, portable, hand-operated devices perfect for the recreational and urban gold prospector and are many times more efficient than the 18th-century technology. Organizations like the GPAA (Gold Prospectors Association of America) have claims all over the continental USA and Alaska and by becoming a member, you become a claim owner! Maps show where gold and many other minerals are in the area where you live and the BLM, National Forest Service manage the claims process which is a Federal Right under the Mining Act of 1872 giving every American citizen the right to mine for precious metals. Many cities across the West still have gold within walking distance from home, take Denver (where I live), a historic gold bearing creek is one block from my house that also has small fish and crawdads; the urban prospectors dream stream!

You can’t eat gold so why have it? Most prepper sites talk about gold and silver as an unnecessary part of prepping and if the SHTF then bartering (or stealing) will prevail, however, millions of people buy gold and silver and it’s quite obvious the companies that sell gold and silver are placing ads on these sites to attract customers. Considering gold is quite expensive (over $1300 today) it’s not hard to see why many can’t afford to place so much trust in gold or even silver and would raw native gold even be tradable? There is a real world example that has already proved that (gold from the ground) is a valuable commodity for trade.

A 2009 YouTube video titled “In Zimbabwe, Gold is the New Currency” shows a young man using a $50,000 worthless Zimbabwe note to clean out the black sand from a small amount of raw native gold to exchange for grain and oil. When a loaf of bread can cost a trillion Zimbabwe dollars, gold became the currency to acquire food on a daily basis. So the point is, raw native gold is an asset that someone is willing to trade for, and this real world example shows how an asset like gold can put food on the table, simply by digging it up. Let’s hope and pray that it never gets this bad but as long as my body still works, I take comfort in knowing how and where to get free gold!

Aside from the frightening possibility of a world collapse or natural disasters, gold prospecting is a fun and exciting way to spend a Saturday play day. Could it be in our DNA to want to seek gold? There is no thrill like digging up some gold and seeing that flash in the pan! For many of us, gold fever is real, and there is no cure. So, if you are a prepper or just want to get out into the water and have fun, then gold prospecting could be your next big adventure! Can you dig it?