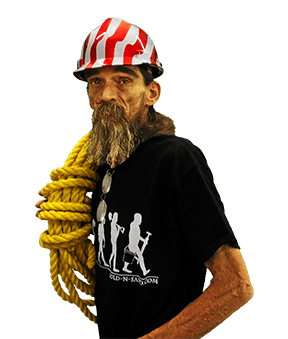 His name is Keith Chapman but everyone around the shop calls him Wile Coyote and if you took one look at him you would agree with the nick name. You’ll find him working for Red and Mike at the Colorado division of Gold Cube and Gold-N-Sand.  Wile is a disabled Colorado Veteran and has been working for these two companies since the beginning (2010) and knows his way around the Gold Banker and Gold-N-Sand Hand Dredge.  Although life has been hard with a family and  many reconstructive surgeries, (he has one tooth left) countless visits to the Veterans hospital “Wile” has shown us what true courage is. “Wile’s an honest hard worker and we are proud that every product that is produced here has his special attention and touch!” says Red Wilcox.  Red is Wile’s boss but the two of them are good friends and although he gets around quite well and never complains, this brave Veteran has seen action first hand, “I was setting up a fuel depot in Beirut Lebanon  and a suicide bomber blew the gates at over 90 miles and hour that’s where I was wounded” says Wile.  Making products for Gold Cube and Gold-N-Sand is not his only talent, Wile’s acting talents are spectacular and  stars in two Gold Cube commercials and also in a gold prospecting comedy called “Gold Men” written and directed by Red.    Red explains “We think he looks like the classic gold miner, with the beard and that rough western look.” As Red explains “We go to shows and outings and everyone wants to talk to Wile about gold prospecting and equipment because he reminds them of what a gold prospector looks like, I think it’s kinda funny and he loves the attention especially from the kids”.  Red and Mike agree that hiring the veterans is a plus for the work force and for the individuals while  Wilie says humbly, “Hey, I’m just happy to be alive and have a decent job that’s in the gold prospecting and mining industry”. Wile loves acting and below you will find a few clips showing his special talent we would love for you to check out at the Gold Men Facebook

Free Gold..Can you dig it!